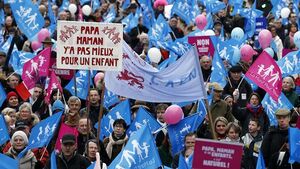 Ms Bourges is the spokeswoman for Printemps Français (French Spring), an amorphous movement, allegedly linked to the Catholic traditionalist, far right, which has spun off in recent weeks from the powerful street protests in France against same-sex marriage. The French Interior minister, Manuel Valls, is considering outlawing Printemps Français after it urged its supporters last month to "target" pro-gay-marriage politicians, media and pressure groups. This amounted, he said, to an appeal to violence "in defiance of democracy".

Ms Bourges, 50, gives few press interviews but agreed to meet The Independent in a café near the Parc des Princes in west Paris. She giggles at suggestions that she is a "violent, Catholic fundamentalist".

"I have been divorced. How can I be a Catholic extremist? I have never voted for the far right. I am passionately opposed to violence of any kind," she said. "Printemps Français is more a state of mind than a movement. We urge transgressive, but non-violent, resistance. That is to say that we intend to defy a state which has imposed a law which will distort and corrupt the true foundations of human society and civilisation.

"When we speak of 'targets', we are not advocating violence or terrorism. We are talking of passive resistance, like Gandhi. We will, for instance, make the lives of ministers a misery whenever they travel or appear in public."

Ms Bourges, wearing jeans, a grey jumper, a white t-shirt and a short black raincoat, could be a "maman" waiting outside a Catholic school in one of the well-heeled western arrondissements of Paris. Or she could be a self-employed businesswoman.

She is both. She is a business consultant and long-time campaigner on family and Catholic issues and a divorced and re-married mother of two. Friendly and soft-spoken, she expounds an elaborate conspiracy theory. "Human values" are threatened by a "programme", driven by a broad coalition of leftists, feminists, gay lobbyists, freemasons and international capitalists. The gay marriage law is a by-product of "gender theory", imported from the United States, which seeks to eradicate "maleness" and "femaleness" and make us all socially gender-free, liberal-libertarian, rootless, amoral, global consumers.

She does not appear especially dangerous, though the Interior minister, Mr Valls, is not the only person to insist that she is.

Beatrice Bourges used to be one of the four spokespeople for the broad, popular movement against same-sex marriage, "Le Manif pour Tous". She was kicked out in March after encouraging a section of militant protesters to break away from an official march and defy a ban on demonstrations on the Champs Elysées.

– "I'm no homophobe - but the law on gay marriage undermines humanity": Is Béatrice Bourges of Printemps Français the most dangerous woman in France?, The Independent am 10. Juni 2013